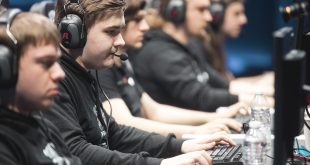 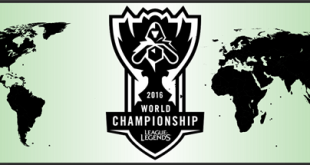 Today I thought I would take a dive into the summoner spell data from all 2016 Summer Split games from NA, EU, LCK and LMS (as always, no LPL data, no tie-breaker games). Since there is no significant difference in win-rates for different summoner spells in different positions — which is to say that the pros know what they are doing and don’t over or undervalue certain summoner spells — this post will be limited to some descriptives. I hope it provides you with some interesting information such as how often mid-laners take teleport or how some things have changed from the regular- to the post-season. The data sums up 843 games and 16860 summoner spell choices (10 players per team, 2 spells per player). Since I will look at whether a spell was taken or not, the number of observations reduces to 8430 (you can either take Teleport or not and a player cannot take it twice in a game). 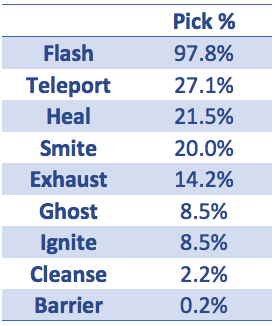 Let us get started with the all beloved Flash. As expected, it was taken almost always, 8242 out of 8430 (~ 97.8%) times to be precise. The 188 times it was not chosen, it was usually substituted by ghost. There are 16 games where a player chose neither of the two spells, 15 of which were Fizz games. It is probably not surprising that Huni is the only one who has an Ignite/Teleport game with Hecarim under his belt. Here are all summoner spells with info on how often they were picked.

To look at summoner spells in more detail, I think it makes sense to break it down by role.

Top: Not much here besides the Ignite/Teleport games above. There was only one game where the “top laner” did not choose Teleport and in that game, kfo switched lanes with Froggen.

Jungle: I think the “I don’t need Smite” meme from lower-elo’s has died, so having a 100% Smite presence should be no surprise to anyone. For the second spell, Flash was chosen 92% of the time and Ghost the remaing 8%. 133 out of the 135 Ghost games were on Hecarim or Olaf, 2 on Rengar and Volibear.

Mid:  Mid has the most options when it comes to summoner spell choice and it shows: 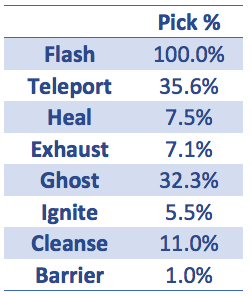 Flash is always taken and the main competition is between Teleport and Ghost. Cleanse sees an 11% presence with the other spells below 10%. If you separate the games into regular- and post-season (playoffs + regionals) games, a trend towards Ghost emerges. While Teleport (36.7%) dominated Ghost (29.4) in the regular season, Ghost jumps to a 50% presence in the post-season while Teleport drops to 28.9%. Furthermore, there are also some small regional differences which will be summarizes in a short table below this section.

AD Carry: Even more boring than the top lane. There is only a single game where the ADC did not choose Flash/Heal and it involved an intentional Teemo-pick in the top-lane. Can you guess which game it was?

Support: The only role besides mid where no two spells have a pick rate above 90%. The tradeoff, as you can imagine, is between Exhaust and Ignite, with the former having a 64.1% and the latter a 35.9% presence. As mentioned at the beginning, there is no relevant difference in win-rates between the two choices. Here is a breakdown of Exhaust pick rate by champions which have seen play as support in at least 40 games: 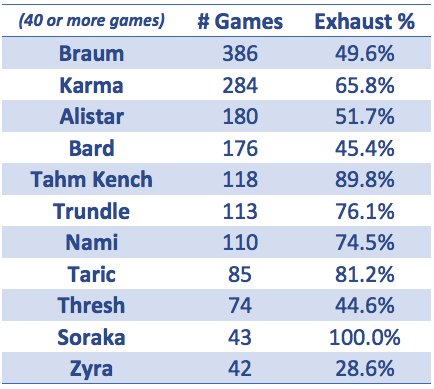 Soraka tops the list with a 100% Exhaust rate and Zyra sticks out as the aggressive support who likes to pick Ignite.

Towards the playoffs/regionals, we see a shift in overall exhaust use. While Ignite was picked 38.7% of the time during the regular season, it was only picked 19.0% of the time after that.

There where some small differences between the regions with regards to the Teleport/Ghost choice mid and the Exhaust/Ignite choice for support:

Teleport on mid-laners has a higher presence in EU and LMS and NA seems to rely more on Cleanse/Exhaust/Ignite/Heal mid than the other regions. The Exhaust/Ingnite decision also shows some variance, with EU using Exhaust almost 70% and LMS only 59% of the time.

Before I finish, I thought a summoner spell discussion without “Flash on D or F?” would be missing something. I mean, it could decide whether you are able to pull this move off or not:

I don’t have access to keybinding-decisions by the players, so all I can do is check whether Flash was the first or second summoner spell. If we assume that most players keep the keybindings where they are, we can say “Flash on D” 41.2% and “Flash on F.” 58.8% of the time. Also, people who choose Flash as their first spell (D), win 51.2% and those who chose Flash as their second spell (F), win 49.2% of their games.

If there is anything else you want me to look up, let me know. If you want updates on stats and more game-relevant analysis, follow us on twitter and check out the rest of our content here on the site. We will launch our Worlds stats section after day 1 of the tournament. 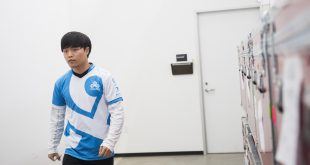 For Cloud9, Jung “Impact” Eon-yeong is having the best season of his career. Some may …